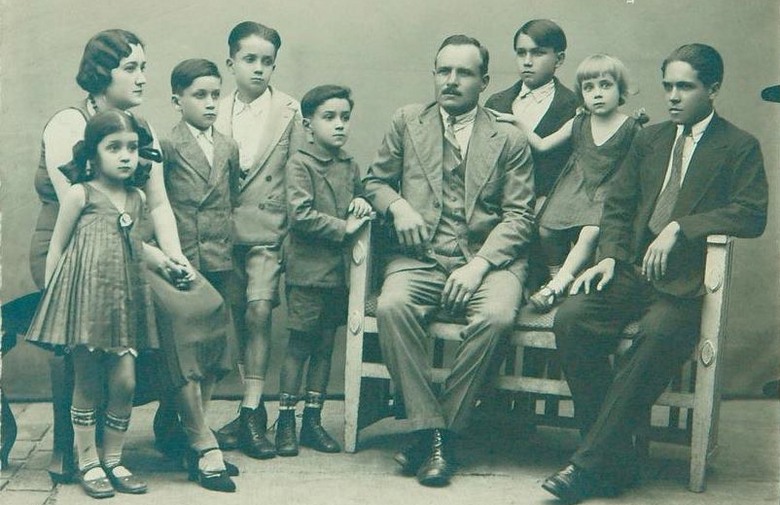 A few weeks ago, I started a collaboration with the portal “Moja Hrvatska” with Croatia’s leading newspaper “Vecernji List” writing articles on topics related to the  Croatian diaspora. Moja Hrvatska (My Croatia) is a new section of the newspaper,  that publishes articles from almost 20 authors from around the world contribute articles on topics  that are relevant to the Croatian diaspora. Below is my first article published in Croatian and translated into English.

Author: Alejandra Pavisich.
It all started in kindergarten when I realized that my surname sounded very different and strange. It was 1976, and being a little child I could then only write my nickname in Spanish because it was made up of five letters. I did not know what this name last name was all about, so I asked my father: “Where is our last name from?” I asked  my father who answered:” It’s Yugoslavian, your grandfather Francisco (Frane) Pavisich was from that country, when he arrived in Bolivia.”

He showed me a black and white photograph of a strong, older man who had a mustache. Grandfather Francisco was looking at me from the picture with a gentle look to life, and he really looked like my father. However, Francisco grandfather had died in 1966 – five years before I was born.

Francisco Pavisich was born in 1887 in Nerezisce, Brac Island in Croatia when it was still part of the Austro-Hungarian Empire. His mother and father had died during his teenage years, so at the age of 19 Francisco was already an orphan.

But life has it’s surprises, and my grandfather crossed the ocean to start a new life in South America, in Bolivia. In 1906 he came to the booming Bolivian city of Oruro, where his brother and many Dalmatian friends were working as managers of tin mining operations, at that time tin was the main export product of Bolivia.

Life went on and 81 years after the arrival of Francisco in Bolivia, my parents Dante and Olga visited Croatia, Serbia, Bosnia and Herzegovina and Slovenia. I remember vividly that after that 1987 trip I carefully examined the pictures that they brought back, and saw all the beautiful places and our relatives who were living in the motherland. That same year,  I began to exchange letters with my cousin Marina Pavišić of Split. I could not believe how I looked so much like Marina’s brother, Marko Pavišić who was also my cousin.

When I left Bolivia to study at the university  in the early 1990s in the United States, the war of independence of Croatia began.  CNN and other international media, constantly showed the bombed ruins of those beautiful places that appeared in the images of the pictures of my parents. It was very difficult to go through those years seeing the havoc caused by war.

My knowledge of Croatian history until then was limited to brief articles about Croatia, which were published in the Encyclopaedia Britannica we had at home. But soon after that, I started looking for new information about the country of origin of my family.

The war had started in that fateful year of 1992. For the first time in my life I felt a passionate love for Croatia, and I wanted to know more about my roots.

A year later, due to a summer course in Austria I went to my first trip to Europe. I remember it as if it were today. From Venice I saw the Adriatic for the first time, and felt the smell of earth and water, it was the closest thing to imagine being in Croatia, and I could feel the motherland that was across the Adriatic Sea, my heart was aching to visit Croatia. But I couldn’t visit because of the homeland war in Croatia I could not still travel to visit our country!

“Well, if I must speak Croatian, I will learn the language,” I said aloud to myself, before I fully realized that this statement would begin a life changing event in my life.

To learn Croatian, I learned that I could apply  to a Croatian language course which was sponsored by the “State Office for Croats outside Croatia”, so I applied to that partial scholarship and got it.

So in 2013, exactly two decades after seeing for the first time the Adriatic from Venice, I went to live and study in Zagreb, Croatia for 5 months. It’s that precise moment that begins my passionate emotional connection with Croatia, when I finally begin to understand what it means to be an immigrant.

It was an experience that fed and nurtured my love to my Croatian roots, but at the same time I acquired a strong sense of self-knowledge and understanding of Croatian values. These were the values  that had been taught to me by my parents, and they were originally brought to Bolivia by Grandfather Francisco these values were: a strong sense of duty, responsibility, hard work, the importance of education and to encourage the younger generation to be hard working, decent and fair citizens.

During my stay in Zagreb, I had to do the paperwork for health insurance and one of the officials of the Health Institute of Croatia gave me one of the best compliments of my life.

He took the passport, and said:

“Okay. Um … Bolivia … Alejandra … Pavisich …Pavišić? But if you’re one of us! What are you doing here?” I laughed and replied, “I am here to learn the Croatian language and thanks for your compliment, now I feel like a real Croat in Croatia, being here is like being at home.”

It was the most beautiful and meaningful compliment that I got during my stay of five months in Croatia.

My relationship with the motherland remains strong. Two years ago I received my Croatian citizenship and got my Croatian passport recently. I’m still learning about one of the most beautiful countries in the world, sharing important information about our culture, the problems and issues that arise to acquire Croatian citizenship, as well as information and articles on Croatian history, sports, culture, current events and cooking. More than 8,000 fans worldwide are currently subscribed to my Facebook page “Dobar Dan Santa Cruz”.

Having a document that says I’m Croatian is wonderful, but to feel at home in Croatia, that is priceless!

“You’re one of us” – remains the warmest welcome I have gotten anywhere.”Source: http://mojahrvatska.vecernji.hr/pavisich-pavisic-pa-ti-si-jedna-od-nas-1069272